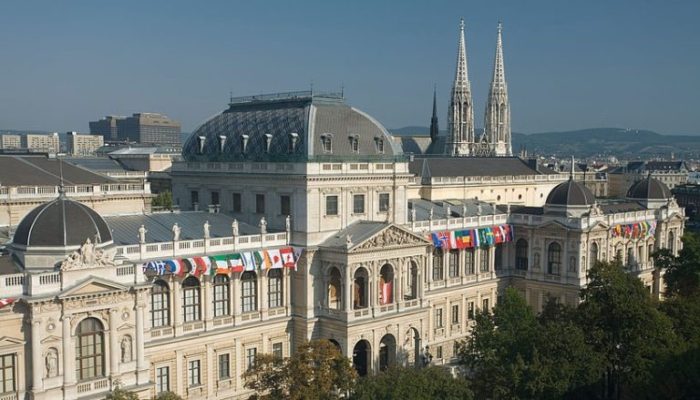 It is my pleasure to report that, after spending the last week in August in Vienna attending the Twenty-first IAAP conference, Depth Psychology and Jung’s legacy are alive and flourishing.

When I approached the front steps of the University of Vienna for the first time and saw the large banner announcing the conference, I felt a surprising burst of pride and excitement. Even more surprising was the fact that I continued to feel that way throughout the week, as did many of the participants I spoke with. It was the largest Congress to date, with 1400 Jungian analysts and trainees in attendance from all over the world. 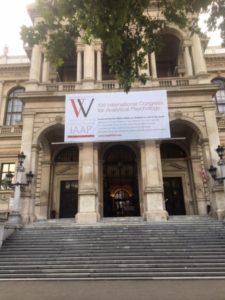 The timely theme of the Congress — “Encountering the Other, Within Us, Between Us, and in the World”—  inspired a multitude of presentations. The plenary sessions each morning were both challenging and thoroughly engaging. The only problems  we faced were choosing from among the twelve or thirteen sessions going on simultaneously in each of the three afternoon breakout periods, and finding our way around the labyrinthine building.

There was a healthy amount of disagreement, some of it quite vocal, and on-going dialogue in multiple languages. Perhaps most heartening of all was the increased diversity, with participants and presenters from China, South Africa and Russia, as well as all over South and Central America,  Mexico, Canada, the US, the EU, Australia, New Zealand and Japan.  One of the most moving of the plenary sessions, for me, was a panel of White and Black South African analysts who compared traditional healing with depth psychology.
The Congress was a feast, and I think it would have pleased Jung to see all of us there in Vienna.

Four NYAAP analysts presented papers at the conference of the International Association for Analytical Psychology in Vienna this August: Les Stein, Sarah Jackson, Beth Darlington and Ilona Melker. Their papers were excellent, well-attended and well-received.

Les Stein: The clinical impact of urban terror on the self

“The constant, recurring stress of urban living has been exacerbated in past decades by opioid addiction, homelessness, family dysfunction, crime, widening income inequality, and displacement of populations, with resultant mental health issues manifested by increasing suicide rates and depression. The problems have reached the level where they are considered a form of trauma – “urban trauma”. When there is overt urban terror as well, the urban trauma adds to the destructive effect and yields “complex urban trauma” that is not easily treatable.

The definitions offered over time of the Jungian “Self” need to be rethought in order to find an effective treatment for complex urban trauma. Coming closer to Jung’s real view of the Self provides a possible method of dealing with the effects of terror attacks in urban areas.”

Sarah Jackson: The Otherness of Art

“I shared a break-out session with Linda Carter, from the Pacifica Graduate Institute, and we had the honor to be introduced by Marian Dunlea, whose new book “Bodydreaming” [Routledge, 2019] was launched at the Congress. My presentation, entitled “Images of the Other in Visual Art”, was an informal discussion of a group of art objects, some depicting encounters with an Other or Otherness, and others which were in themselves so strange and alien that the endeavor to find their beauty and meaning provided kind of analogue to working with images in dreams.”

Beth Darlington–The Story of Cain: The Myth We Would Like to Forget

“The title of my presentation at the 2019 IAAP Congress in Vienna was “The Story of Cain: The Myth We Would Like to Forget.”  It focused on Cain’s question to God after killing his brother Abel, “Am I my brother’s keeper?”  Genesis does not provide an explicit answer to that question, but Cain’s exile and punishment implicitly suggest that the answer is “Yes.”  Our current social and political context demonstrates the relevance of Cain’s question to our own times, with hate crimes and numerous blatant attacks on our metaphorical brothers and sisters.  Lord Byron’s adaptation of Cain’s story in 1821 introduces narrative changes that make Cain’s individuation possible and enable us to understand the transformative power of compassion when we can face our guilt and learn from our mistakes.”

Ilona Melker: Tower on the Marsh–Dark Coniunctio as Other

We will consider when love is replaced by enmity and the coniunctio is pushed into the realms of anxiety and depression, activating the darkness within psyche; its nigredo. As Jung pointed out “the coniunctio can take more gruesome forms than the relatively harmless one depicted in the Rosarium.”

We look at the role of how familiar early traumas help activate the dark Dionysian bondage of pleasure-pain in sadomasochism. In this context we will consider a time in Christiana Morgan’s life  as well as some contemporary clinical material  from the presenter’s case material.”