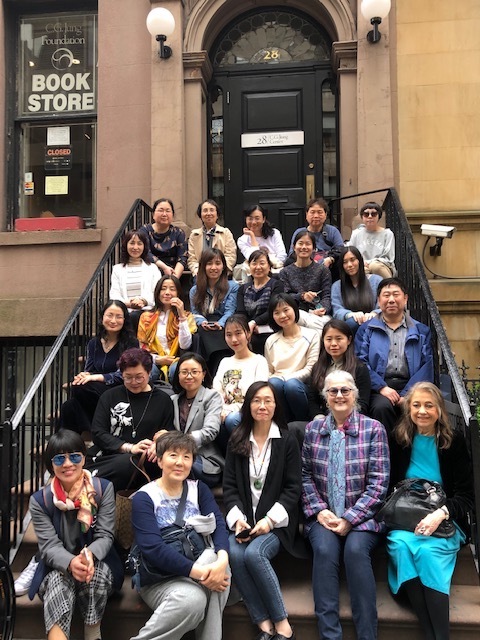 The C. G. Jung Institute of New York, the training institute of the New York Association for Analytical Psychology, is known internationally for its commitment to excellence.

In an effort to enrich both Americans and Chinese, the Institute hosted 25 students from the People’s Republic of China led by their professor Gao Lan Shen on April 14, 2019. The event was organized  Jungian Analyst, Beth Darlington. In the morning, Dr. Darlington guided the group to the Kristine Mann Library where they were given a tour by the librarian Lorna Peachin. They then went to the Archive for Research in Archetypal Symbolism (ARAS) for a tour by curator Ami Ronnberg. In the afternoon, the group watched a film called Women in China: Up Against the Wall, by Jungian Analyst Laurie Schapira. And Gary Trosclair,  president of the New York Association for Analytic Psychology (NYAAP) and jazz musician, presented a paper on the Dionysian Foundations of Jazz.  Analysts-in-training, studying the expressive therapeutic technique known as sand tray with Ilona Melker, joined the group to hear Dr. Shen discuss her experience of working with the victims of the 2008 earthquake in Szechuan.