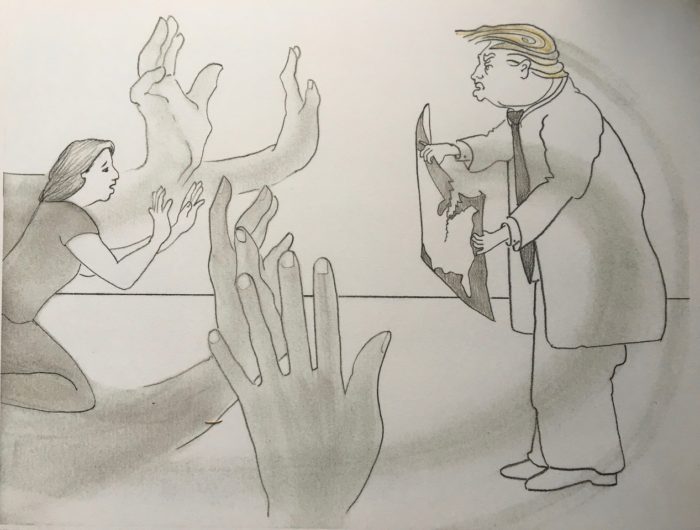 Drawing by Beth Thielen, from the book “Country Gone Missing: Nightmares in the Time of Trump”, 2018. Crowd sourced nightmares illustrated by Beth Thielen and edited by Louise Steinman. For information go to: countrygonemissing.com Proceeds to benefit Swing Left. This drawing is an illustration of the following dream: "We are getting rid of Trump bit by bit by killing him with kindness. I am kneeling in front of him, beseeching him, saying, “It’s ok. Relax. Just calmly put down the country and we’ll take care of it all.” Like he was pointing a gun at me. My kindness is like taking slivers of him bit by bit and placing them in folded sheets of waxed paper. Then the process allows me to take longer square blocks of him by chanting Om.”

In this post Alexandra Krithades, NYAAP member and President of the C.G. Jung Institute of New York, describes the role that she feels psychoanalysis needs to play in helping clients deal with the impact of dramatic social change, and the role that psychoanalysts themselves must play in this era. Her essay was originally posted at TherapyRoute.com.